HONEY BEE CAUGHT INSIDE AN AIR-CONDITIONED BUS
IN PORTLAND, OREGON ON JULY 19, 2002

What I thought was an empty seat
was you, cooled and woozy.
I took the neighboring seat,
then lifted you onto a birthday card
fetched from my purse.
You toddled tipsy at the edge,
a drunk teetering on a tightrope.
Don’t fly.
For a long time we sat that way,
you looking dizzy, me worrying.
Then I pulled the bus rope and rose
with you, still unsteady, on the card.
We re-entered the heat of the day.
I apologized for releasing you downtown,
amid the stink and rush of Homo sapiens,
no doubt miles from your hive.
I placed you on a yellow petal
of a tall chrysanthemum
in a tidy, landscaped bed
at the base of a skyscraper.
I was so sorry.
I thought you were dying.
But then. 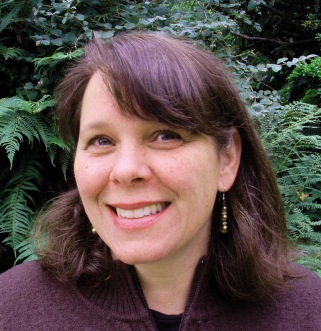 Writer and calligrapher Christine Colasurdo grew up playing in woods near her family’s house in Portland, Oregon. She remembers huge flocks of migratory birds from her childhood as well as lots of wasps, ants, grasshoppers—and bees. She provides habitat for mason bees in her back yard and is currently enjoying watching a hive of wild bumblebees thrive in a repurposed birdhouse. Whether it’s from their beauty or stamina, bees are always teaching her how to live.

Christine has won numerous awards for her poetry, and she’s the author of two books on the outdoors: Return to Spirit Lake: Life and Landscape at Mount St. Helens (2010) and Golden Gate National Parks: A Photographic Journey (2002). She was awarded a 2010 residency from the U.S. Forest Service and has twice been a featured guest on National Public Radio. She has also written radio commentaries for KQED FM, including one about pollinators.

She has given lectures in Oregon, Washington, and California about Mount St. Helens. As a volunteer, she has created three museum exhibits about the volcano, has served on the board of the Mount St. Helens Institute, and has worked to protect the Mount St. Helens National Volcanic Monument and neighboring lands from road-building, logging, development, and mining. Visit christinecolasurdo.com.

One thought on “A Poem by Christine Colasurdo”