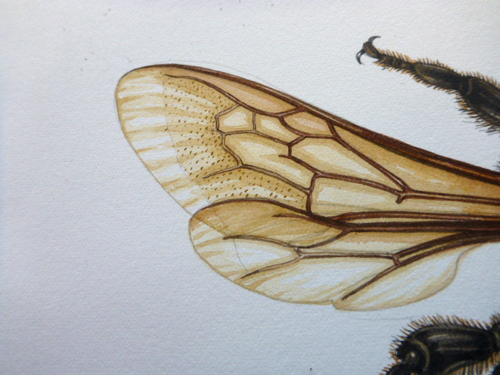 A year ago on June 19th, the seeds of Winged were planted when an estimated 50,00 bumblebees were killed by pesticides in Wilsonville, Oregon. That number was especially shocking since bumblebees tend to live in colonies of 25 – 75 bees. The loss was, obviously, staggering. Poet, educator, and editor Melissa Reeser Poulin was immediately moved to respond. Thus, Winged was born.
Feeling outraged and wanting to utilize art as activism, but not having a connection to the larger beekeeping community and knowledge base, a common friend introduced me to Melissa. To say it was kismet is trivializing the partnership and connection; I think we both would feel comfortable citing fate. I am a local poet and writing instructor, and owner of Bee Thinking. Our partnership has been a perfect fit.
Being awarded a grant from Regional Arts & Culture Council gave Winged a specific shape and task, one we have approached with vision, humility, and zeal. We received approximately 200 submissions and had a long process of carefully considering each one, and guiding the book into a primary, then secondary, and now (almost) final shape. We cannot thank the writers enough who submitted their work, we simply can’t. It has been heartening to witness not only how many writers care deeply about bees, but also the fortification of the age-old relationship between artist and bee (as symbol and muse), actualized on paper. Bees have influenced artists and writers since ancient times and we can attest that the relationship is still intact, and strong, as Winged itself will illuminate.
Here in Oregon, the past two weeks have been disheartening for beekeepers as a rash of insecticide poisonings have laid waste to multiple honeybee colonies in at least 4 different locations, and an eerily similar bumblebee poisoning to that of a year ago in Wilsonville, OR occurred in Eugene, a town that was dubbed the “Bee-Friendliest City” in the U.S. earlier this year. That poisoning happened a year to the day after the Wilsonville die-off that spurred Winged.
The relationship between humans and bees has never been more imperiled and to that end, we as artists stand to lose one of our greatest natural symbols. Additionally, writers and artists are in the shocking position of having to record the decline of pollinators through our works. Winged is meant to be a record of this moment, as a document that artfully honors the relationship, the importance, and the beauty and peril of one of the most vital of all pollinators: the honeybee.
Winged will be available this fall. Initially, it will be printed in a limited run to keep the book within budget, honor contributing writers, and meet our original goal of getting a portion of sales to pollinator conservation efforts. We personally will not be profiting in any way from Winged; quite the opposite. We will be posting information when the book is available for pre-order. Due to the limited number, we recommend purchasing early!
Please also watch this blog, as we will be sharing some remarkable work from writers and supporters of Winged over the next few months.
Thank you all for your support and belief in this project. It is one we feel deeply about and we are humbled, and honored, to illuminate the essential relationship between writers and bees.

One thought on “Forward”