An amazing post from treatment-free beekeeper Kat Nesbit of Bliss Honeybees. Written two years ago, this is the story of two intrepid beekeepers called to remove a feral honey bee hive from a public building. It’s an incredible first-hand look at these creatures, and Kat’s creative approach to moving the hive. For more on Kat and Bliss Honeybees, including this year’s Treatment-free Beekeeping conference, please visit her website.

Yesterday afternoon I went to the Veteran’s Administration complex in White City, Oregon, to remove a hive from a 2nd story roof with my friend John. They didn’t want to tear up the roof, so the plan was to go in from the ceiling of the hall below the hive. When we arrived we found they had quarantined the hall where the bee removal was to take place. It reminded me a little bit of the scene at the end of ET where the feds have come in and put ET in a plastic prison to keep the public “safe”!

They had already cut a hole in the ceiling, from which fluffy clouds of insulation were emerging like really nasty cotton candy. We needed to expand the hole to completely expose the nest, which we did with a reciprocating saw. It’s the first time I’ve been in a beehive since December and I could feel my heart start to beat faster in awe and appreciation of what these amazing little creatures can accomplish.

Since the VA had access to a lift (like the kind that construction workers or painters use to work at elevated sites), we decided to situate the lift right outside the 2nd story window. I climbed out the window and set up my work station in the narrow cage. John stood on a ladder inside and cut the comb out of the nest, then handed it teaming with bees to me on the lift. I brushed the bees off into the box with a bee brush, cut the comb down to fit the frame with my hive tool, and rubber banded the comb into frames. Over time, the bees will chew through the rubber bands, attach the combs to the frame, and fill out the empty spaces.

The bees standing on the top of the frame in this photo are sending out a “come hither!” scent to the other workers to tell them where to rejoin the colony. To do this, worker bees have a special scent gland called the Nasanov gland on the dorsal side of the abdomen. The opening is located at the base of the last tergite (plate) at the tip of the body. The bees raise their abdomen and tip the very end of to expose the gland, then fan like crazy with their wings to send the pheromone out into the air. Bees have an excellent sense of smell and can follow this scent to find their sisters. This 2nd photo shows the same bees zoomed in. 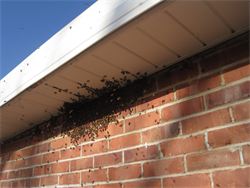 This photo shows the outside entrance to the hive, where returning foragers are milling around in confusion as they find their home gone. Once we cut all the combs out, the VA lowered the lift so I could get out. Then we sent the hive back up on the lift and situated it as close as possible to the original entrance so that the bees remaining in the roof and the returning foragers would smell their family and join them in the box. Hopefully this included the queen, as I’m not at all sure that we got her. Neither of us saw her, and the bees that were fanning at first soon stopped, which makes me think the queen wasn’t in the box. John returned after dark once all the foragers had returned to pick up the hive and vacuum up any remaining stragglers in the original nest (they can then be shaken into the box, usually unharmed). 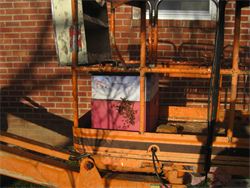 I want to say a big huge thank you to the VA for calling us instead of spraying Raid into the entrance in a (usually ineffective) attempt to kill the colony.March 25th, 2012 update: We did get the queen and she is fabulous! We may use her for a breeder. Lots of brood, few mites. Here are the pictures-the one on the right is just a zoomed in version of the one on the left: