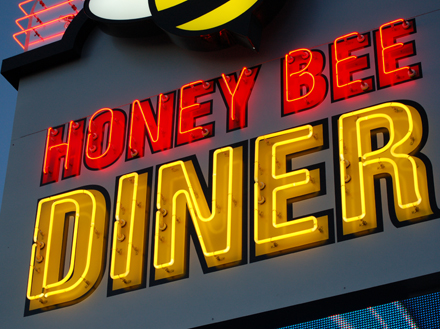 It was 2:29 AM. I was wolfing down a steak at a truckstop diner, in between spreading pallets of bees in the pear orchards. A bee popped out of my sleeve while I was ordering and I quickly scooped her up and held her in my hand. She hadn’t stung and was intact, so she had a chance if I got her back to a hive.

But the waitress had noticed. Her eyes got large as she asked, “What was that?”

I tried to look casual and innocent: “Nothing.” But she persisted, “Was that was a bee?”

I nodded reluctantly, and she asked me to take it outside, which I did. Later, she came over and said, “Can I ask you something? If I hadn’t seen that bee, would you have just held it the whole meal?” I shrugged—I hadn’t thought that far ahead—and she said, “I’ve never seen anything like that. You must really love your bees.”

It made me tremendously happy to realize she was absolutely right, I really do love them. Then she said, “I’m going to have to look up honey bees and read about them.”

That was the honey on the hot bun!