As a young biology intern, I spent a long, hot summer in a Vermont meadow staring at bumblebees.  I caught these unsuspecting bees, put them in glass jars, chilled them to sleep in a cooler, glued numbers on their backs, and watched them roll back and forth like drunken sailors.  As they clumsily awoke, I then recorded their behavior in and around large, orange jewelweed flowers.

We were investigating the “nectar robbers” in this genera of bee (Bombus spp.), the honeybee’s larger and fuzzier relative.  I was on the lookout for the rebels that evaded their evolutionary relationships in pursuit of free sugar.  Instead of entering the flower through the mouth and catching the pollen on their backs to deliver to another flower, the “nectar robbers” would simply crawl around the outside of the flower, nibble on the spur, and drink sweetness to their hearts’ content.  The audacity of these bees!

After that summer, I didn’t stay long in the world of bee science.  I wanted to grow my own vegetables, to learn about soil quality and the things that needed to change in our agricultural systems.  These questions brought me to the Skagit Valley in Washington, and the applied agricultural sciences.  Instead of staring at bees, I spent several summers working on a research farm staring at microbes growing in and around potatoes (yes, all potatoes have some fungi on them!) and I began dissecting raspberry roots to look for spores and nematodes wiggling about.

In graduate school, I was partially funded by farmers to investigate these types of creatures because these are the major pest and pathogens that can devastate economically valuable crops.  The most prominent example is Phytophthora infestans, which literally means “plant destroyer.”  This fungal-like organism was the cause of the Irish potato famine and to this day can still melt a potato field in a matter of days.  For this reason, farmers around the world spend an average of 40 billion dollars every year to control pathogens and pests [1]. Some chemical sprays are used to protect the plant from being infected, while others attack the pests themselves.

On a scientific level, the complete cause of the honeybee colony collapse that we are seeing nationally is still a mystery.  However, clues have begun to surface. A recent study has found that low levels of pesticide exposure from crop pollination make honeybees more susceptible to the deadly gut parasite Nosema ceranae. In this study, several classes of pesticides were found to have synergistic effects contributing to the deterioration of honeybee immune systems.  Chorothalonil, a common class of chemicals found in fungicides, was also found toxic to the bees. This product is commonly used on potatoes and apple trees, as well as on residential and golf course lawns.

To spray or not to spray is a hard question that most growers take seriously.  Yes, there are your “nozzle-heads” out there, real chemical cowboys, but most farmers spray out of desperation. It is not an easy choice.  Some crop varieties are less vulnerable to pests, but when resistance is not an option, pest management becomes paramount.  Since starting my own small organic farm, I still hold a lot of respect for the conventional growers I worked with in graduate school and their decision to manage crops chemically.

Our farm operates on such a small scale, comparatively, that we need to grow a diversity of high-value crops to stay profitable.  Through scale and diversity (many of our crops are pollinator-friendly, like sage and chamomile), we manage our pests without chemical options, but it is not easy.  I won’t sugarcoat the reality that this is not always the easiest or most efficient way to grow food.  It takes a lot of labor and a lot of time tilling the soil to get the same plant health and weed management effects as chemical management.

There is an efficiency that comes with using chemicals in farming, and a range of chemical products currently in use today. But not all are created equal. As the honeybees are showing us, there are long-term effects of chronic chemical use that can be potentially devastating to our entire agro-ecological system.  The truth is we just don’t know the whole story.

I have gone back to looking at bees again, this time in the context of our own farm and well-being.  After all of my time studying the bad pests in agriculture, I find it interesting that the beneficial organisms might be the most telling in how the management of our food systems needs to evolve.  I appreciate the efforts that so many people are making to better understand this startling loss of honeybees.  I am inspired by friends that are taking up beekeeping and starting hives in their backyards. Our farms are food producers, but they are also habitat.  How can we marry these two roles in a way that keeps humans and honeybees healthy for years to come? 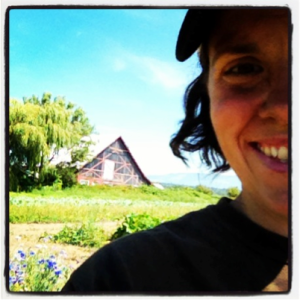 Jessica Gigot, Ph.D. is an educator, poet, potter, and farmer. She has lived in the Skagit Valley for 10 years and appreciates the diverse agricultural and artistic communities that coexist in this beautiful place. Jessica is part-time science faculty at the Northwest Indian College.

She is also owner/operator of Harmony Fields, which produces herbs, specialty produce, and lamb; and offers workshops focused on creativity and health.  Around town, she plays the guitar in an old-time folk duo called the Dovetails and co-hosts the weekly DIY radio program, Skagit by Hand.